UPDATE: Since the publication of this article, Grace, Ocala, has raised close to $30,000 for Ukrainian refugees.

The unthinkable is happening in Ukraine, and we watch it every day. Apartment buildings, hospitals and train stations, bombed into charred rubble. The machines of war, now mangled heaps of metal. The lifeless bodies of civilians scattered on the ground.

Amid this overwhelming scenario, one Central Florida congregation has put feet to its prayers. Grace, Ocala, is partnering with a small church in Italy to make a difference in the lives of some of the 4.7 million who have now fled Ukraine. It began with a connection through the church’s rector, The Rev. Jonathan French, whose son, Micah, serves in the Air Force in Aviano, Italy.

A few weeks ago, Micah sent a photo to his family that showed him and his wife, Victoria, sleeping at their church, Serenissima Ministries near Aviano, with the Ukrainian refugees the church was hosting. Micah and his five siblings grew up at Grace, and the congregation has prayed for him in his deployment to Italy, where Victoria joined him after their marriage in December 2019.

“From [the texted photo], I knew people from Grace would want to help in some way,” The Rev. Jonathan told WCJB. “I made an announcement in church. I said, ‘My son and his wife are over there; they’ve received refugees, and so  … we now have a direct route to care for refugees right now, today.’”

“When we found out that Russia had attacked, we couldn’t believe it,” Victoria said during the same interview. “It was just the worst-case scenario.”

Serenissima quickly formulated a three-part plan to live out the good news of Jesus amid the crisis: donating and collecting needed supplies, including transporting many of those supplies to Ukraine; receiving and hosting refugees in the church building; and helping the refugees receive placement in more permanent housing.

“For me, the strangest thing about this is the quick turnaround,” Micah said. Following the week-long collection phase, Serenissima volunteers drove two eight-passenger vans to a refugee facility in Romania to pick up 16 guests, who arrived at the church on March 21. Only days later, four others arrived. 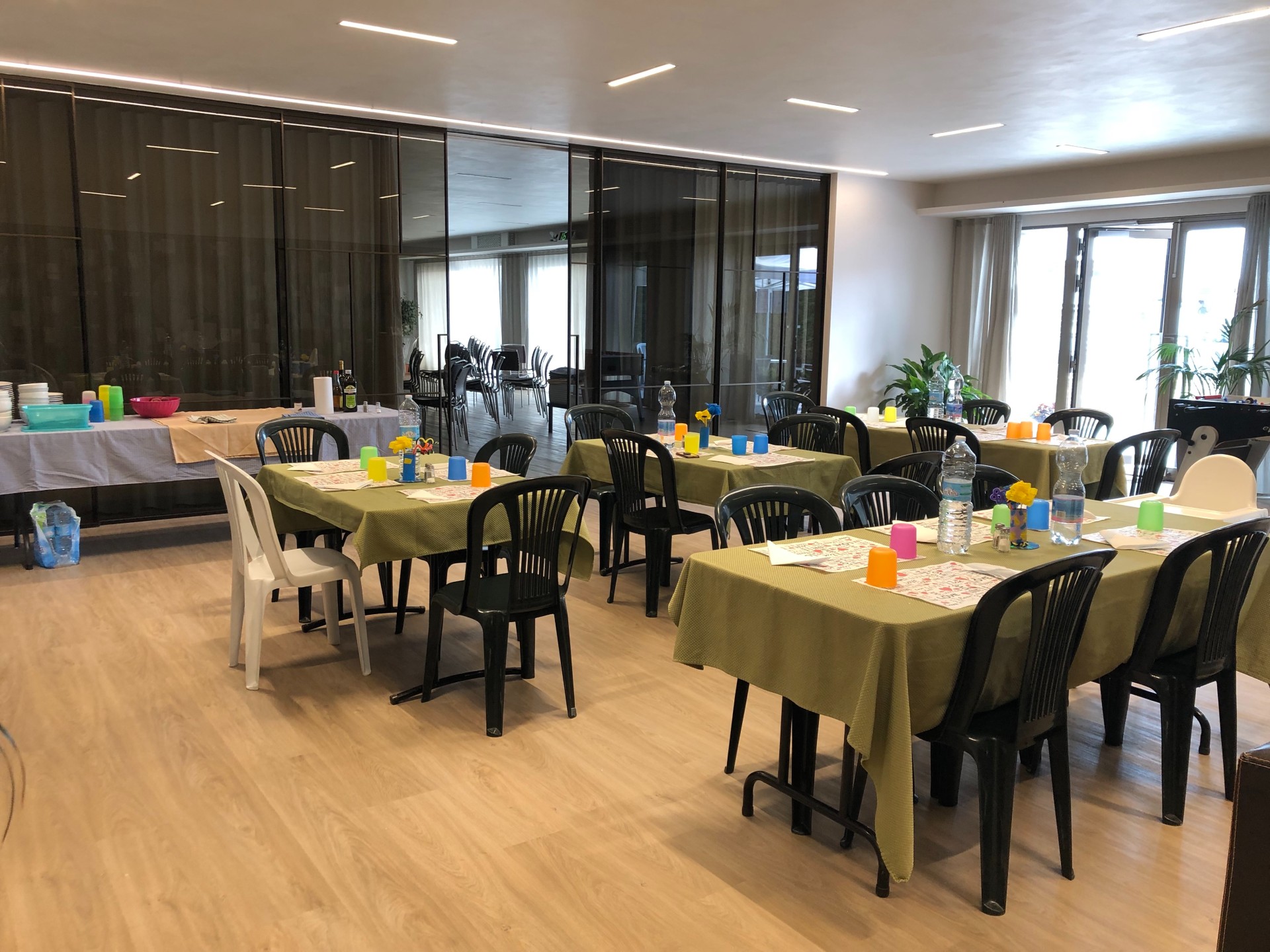 The church turned every possible area in its facility into dormitory space, filling bags with donated toiletries for each new arrival. The small congregation gave hundreds of volunteer hours to clean, prepare meals, arrange children’s activities and transport people to various appointments. Some, like the Frenches, even spent some nights at the church alongside their guests.

Each refugee family has its own story, Micah and Victoria said. Many guests speak two or more languages. One, with the assistance of Serenissima’s pastor, found a job nearby after only two days.

One refugee couple brought their two daughters with them to the church, with one son studying in another country. A second son, however, had to remain in Ukraine because of the law requiring young men to join the war effort.

“No matter how safe they are here, that’s still in the back of their minds,” Victoria said.

Yet Micah and Victoria agree: Despite their circumstances, the Ukrainians do not see themselves as victims. “They are hopeful, resilient and practical,” Victoria wrote in an article for Grace’s website. “They are kind and hard-working. They never thought they would be refugees, and this circumstance is not their identity.”

“Resilience” is how Micah described the refugees’ approach to their new lives. One man, Viktor, translates the church’s services, offered in English, for his fellow Ukrainians each week. “That way, the gospel’s available to everyone,” Micah said.

Grace’s generous donations helped fund much of Serenissima’s initial ministry to the Ukrainians. “Within about four days, $10,000 had come in, and now we’re just a little under $13,000,” The Rev. Jonathan told WCJB. Those funds helped with expected expenses, such as food and the high cost of gasoline, and unexpected ones, such as plumbing repairs for a building suddenly operating at maximum capacity.

On March 30, with church members’ assistance, 15 of the original guests completed the complicated process to receive government documentation permitting them to receive more permanent housing.

Serenissima will soon bring another 50 refugees from the facility in Romania, 25 of whom it is hosting. With the government now overloaded, this group will stay at the church for about three months.

“One thing that really surprised me the most was how effective the community of God is when we all really pitched in,” Micah said. “It’s a small congregation, and I am blown away by the capacity of what we’ve been able to do. … seeing what the community of God looks like in full swing when it’s fighting at 100% – it’s shocking. I know we can do this, and I think it’s really cool.”

“Our pastor said, ‘This is true religion,’” Victoria said. “‘This is what it means to be a Christian: It’s to help those who need help. It’s to put their lives above your own.’ And I think this is a season that has taught me that more than anything else could. I think I will be forever impacted by this period of time.”

Grace continues its ministry of prayer and partnership via its French connection. To help, visit graceocala.org/ukrainerelief.

Zulu
Signup for Our Newsletter

Stay up to date with our latest updates.